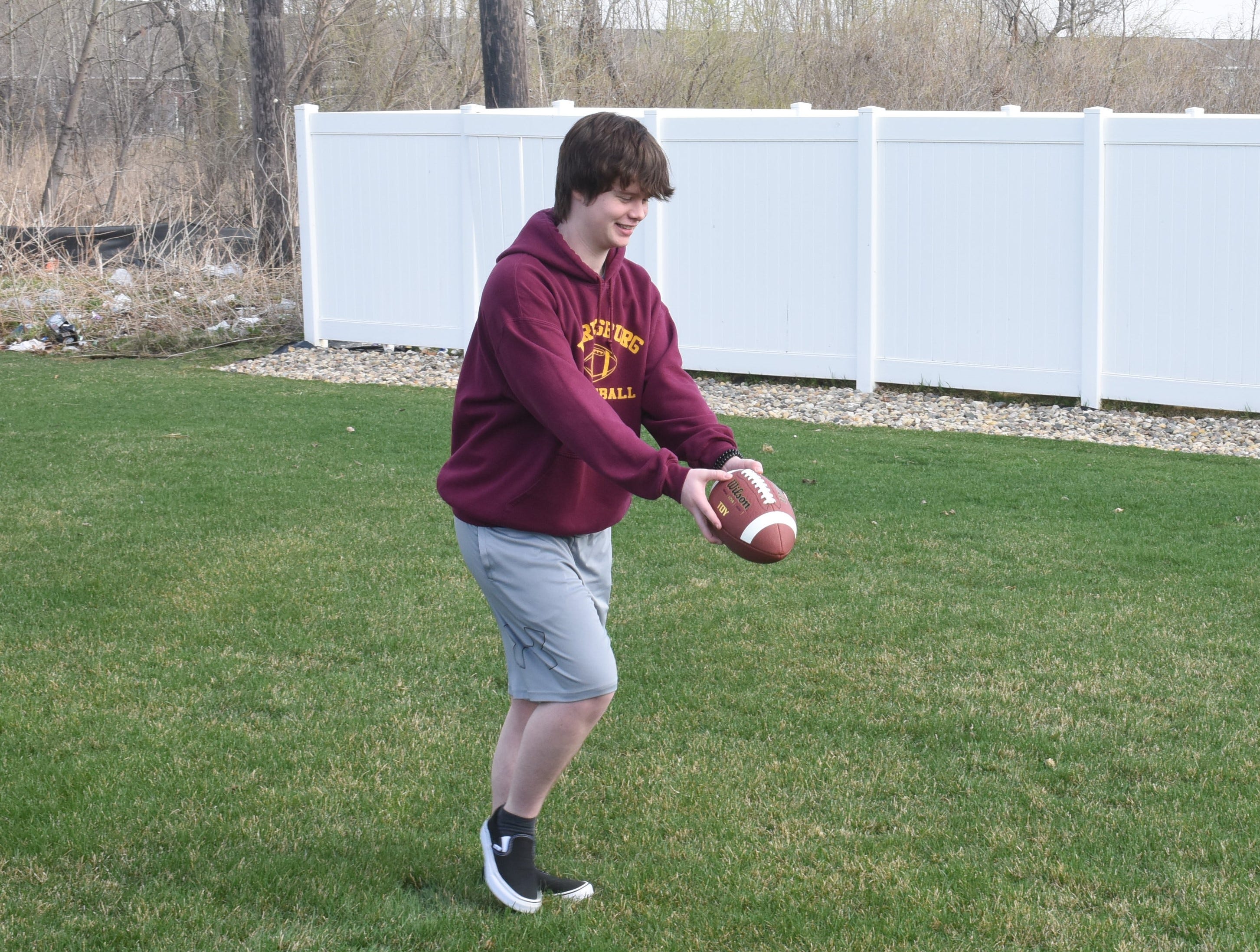 After a group of transgender students in Watertown received anti-trans letters from a teacher who refuted their identities, those students and other transgender youth in South Dakota are left feeling a lack of support from their schools.

While the students say they don’t find acceptance from some teachers and school staff, many feel support at home and from their friends.

On April 26, four transgender students at Watertown High School were handed letters from German teacher Calvin Hillesland. The letters attempted to invalidate the gender identities of the students by noting that when they asked Hillesland to refer to them by masculine names, he felt it was "wrong" and "a lie."

Kai Price and Alex Bryant are two of the Watertown students who received letters.

"I often get slurs thrown at me or people attempting to talk behind my back," said Price. "Most of the time, I ignore it. If they say something really offensive, I will bring it up to a teacher. But it's just a cycle."

More: 'We were all flabbergasted': Watertown students protest anti-transgender letter from teacher

Bryant feels that breaking the cycle of bullying and harassment of trans students will take more than teacher and school district support.

"South Dakota is a very closed-minded state," he said. "They don't fully get it. In other states, people just accept it. But here, people will come up and ask me about my genitalia instead of just leaving me alone."

Kris Wilka, just 14, has become something of a spokesman for South Dakota’s young trans community.

Wilka, who lives in Sioux Falls, testified against House Bill 1217 on Feb. 22, 2021, a measure that would’ve prevented transgender students from playing on the sports teams that match their gender -- from his perspective as a transgender boy.

Shortly after his testimony in Pierre, Wilka was giving dozens of interviews to state and national media outlets, everywhere from Black Hills FOX to KELO, ABC News, ESPN, Outsports, Them, Teen Vogue and GQ.

Being a spokesperson for the entire transgender population in South Dakota at a young age, and having to defend one’s gender to adults in Pierre, would be a lot for anyone. Wilka said he does it so others know they’re not alone.

“Some of those interviews I didn’t want to do, but I know it's a good cause,” he said. “I know that I’m being a voice and someone people can go through to be safe. That’s the main reason why I’m doing this is because I want other trans people to be able to know, ‘Hey, you aren’t the only trans kid in South Dakota.’”

He knows he got some negative feedback on the GQ article because his siblings monitored the comments for him on social media.

“Whatever,” he said of the negativity. “It’s not my fault that they’re not open-minded.”

Wilka tries not to think anything of the negativity, other than that people leaving negative comments just can’t accept that people can change.

“If people are overly rude about it, I’m like, ‘OK, chill out. I don’t really care about your opinion, and have a good day,’” he said. “Kill them with kindness.”

The harm caused by family, school and community rejection, including harassment and bullying, shouldn't be pushed off. According to South Dakota Suicide Prevention, suicide was the leading cause of death among people ages 10 to 19 in 2020.

South Dakota Suicide Prevention also shows that more than 12% of South Dakota high school students attempted suicide in 2019. And according to the American Academy of Pediatrics, transgender individuals, particularly trans men and boys, have the highest rate of suicide among adolescents.

Bryant said he has battled with thoughts of suicide, particularly after difficult days of bullying at school. He said that was true when Hillesland, one of his favorite teachers, handed him the letter.

"I don't know if I can trust anyone else. Especially after this situation," Bryant said.

Bryant agreed to be pulled from the Watertown district by his parent after receiving the letter. He is now being homeschooled.

One of the best ways to help transgender youth combat bullying is simply respecting their name and pronouns, Price and Bryant said. Being who they are is fundamental to their well-being and mental health, they said.

"When I got my first short haircut, I didn't want to die anymore. I felt like a guy, and I looked like a guy. Dressing masculine was one of the first perks I needed to keep living," Bryant said.

When someone misgenders a trans person, Price said that's the time for others to stand up and show support for transgender people.

"It is helpful if our proper names and pronouns are kept in the system. They should try not to show our dead names on anything," Price said.

Both students ask for more support from teachers when they witness bullying and harassment.

"People will yell slurs at me. It happens almost every day, but teachers just stand there and tell them, 'Watch your language,'" Price said.

The harassment has escalated to the point that Price said he is afraid to attend some classes because of the threatening behavior directed toward him by some classmates.

Price said the concerns have been brought to the attention of the school, but that he was told that nothing could be done unless there's a physical altercation.

Without the support from school staff and the community, transgender youth say they often feel like their only option is to endure the scorn.

"Most of the time, I push it aside. I don't know how to deal with (the harassment) otherwise," Price said.

Why is it a big issue for others?

When Wilka heard the news about what happened in Watertown, he questioned why “people make such a big deal out of (being trans)” and said it should be simple for others to respect trans students’ new names and pronouns.

He wants the students who received the letters in Watertown to not be afraid to be themselves.

“If anyone tells you to stop or ‘act your gender,’ tell them to go (expletive) off in your mind, and tell them something nice to get them to go away,” he said.

Wilka said he had a similar experience to the students in Watertown when he attended St. Mary Elementary School in Sioux Falls. He had to use the teachers' restrooms instead of boys' student restrooms.

He claims he was also told that if he had advanced to middle school at O’Gorman, he wouldn’t be allowed to play football with the rest of the boys and was told to try out for girls sports instead.

Students at Bishop O'Gorman Catholic Schools are eligible to participate only in those school-sponsored teams and activities consistent with their sex, President Kyle Groos said in a statement.

Groos said between the time the school met with one of Wilka's parents in March 2020 to discuss the "expectations it holds for all students" to the time a follow-up meeting was scheduled in June 2020, the family notified O'Gorman that Wilka would enroll elsewhere.

Wilka has found acceptance at North Middle School in Harrisburg, he said. He said he felt accepted when one of the coaches accepted him right away when he disclosed he was trans.

He stays friendly with all the teachers and students at the school. If there are people who aren't accepting of him, Wilka doesn’t know it because he doesn’t want to hear their rude opinions anyway, he said.

Almost a year after Wilka testified against HB 1217 in Pierre, Gov. Kristi Noem signed into law Senate Bill 46, which mandates sports participation to be segregated by sex at birth. Wilka said he doesn’t think the new law will affect him because his school is accepting of him, but he worries for students at other schools across the state that might be stricter.

“It’s going to affect them a lot more and make it a lot harder, if not impossible, (to play sports), which really sucks,” he said.

When Wilka isn’t at school or playing football, he likes longboarding, playing guitar, reading, writing, doing some puzzles or spending time with his loving, accepting family -- mom Jena Holley, dad John Wilka, five older sisters and two older brothers -- and his dog Zoey. He also plans to learn how to drive soon, with his parents help.

This summer, Wilka will be the grand marshal of the Sioux Falls Pride Parade. It will be the third pride he’s attended after going to festivals in 2019 and 2020.