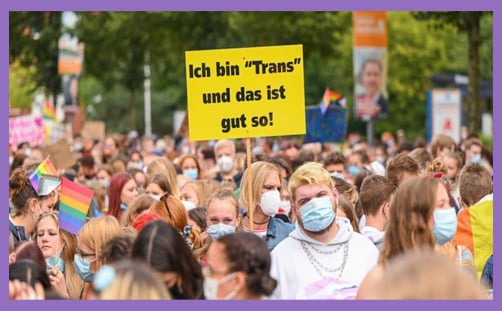 Just as a victory for sex/gender common sense is won in the UK with the closure of the Tavistock gender clinic for children (and a class action brought by a thousand families), an equal and opposite madness emerges in Germany, where the proposal is to allow people to change their name and gender every year, should they feel so inclined.

They specify ‘gender’ not ‘sex’, but so few people seem to understand the difference these days that the proposed law may well be referring to annual transition from male to female to male to female, depending on the weather.

The new “self-determination law” is ostensibly “to make it easier for transgender people to legally change their name and gender, ending decades-old rules that require them to get expert assessments and a court’s authorization”.

It replaces the “transsexual law”, which, since 1981, has required medical/professional assessments from two experts who are “sufficiently familiar with the particular problems of transsexualism”, followed by a court ruling to reflect the change in gender on official documents.

There is a curious, and quite revealing sentence in this article: The existing law “breathes the spirit of the ’70s,” Germany’s minister for families, Lisa Paus, said. “At the time, the state wanted to help people who were considered psychologically ill, and it set high hurdles for this.”

So gender dysphoria, which is indeed a psychological illness, is to be cured by unquestioning perpetual indulgence?

And not only for adults:

The proposed new rules provide for minors ages 14 and older to change their name and legal gender with approval from their parents or guardians; if they don’t agree, teenagers could ask a family court to overrule them.

In the case of children under 14, parents or guardians would have to make registry office applications on their behalf.

So young teenagers – children – who are known universally to struggle frequently with matters of identity and sexuality, will be able to change their registered name and gender without let or hindrance, and “no further changes would be allowed for a year”, which we are told is “a provision intended to ‘ensure the seriousness of the desire to change'”.

Doesn’t the possibility of being Gunther on Boxing Day and Helga by the following Christmas rather suggest a total lack of seriousness of the desire to change? Where is the legal-cultural seriousness in the provision of a subjective self-identifying annual change without further formalities? We aren’t talking about pantomime play-acting here, but legislation which changes people’s legal identities on the state’s official records, with fines “in cases where information on a person’s gender or name change is disclosed without their permission”.

So if someone points out that Helga was Gunther only yesterday, that’ll cost you €5,000, thank you very much.

And where is the societal-familial seriousness in allowing teenagers to take their parents to court to enforce the decision upon them should they object to Gunther becoming Helga, because only last year Gunther was Lina, and Mum is sick and tired of sewing new name tags on every school sock and shirt or blouse?

But no doubt this “self-determination law” will be passed and promulgated with appeals to compassionate affirmation and pastoral care. And no doubt children will be dispensed their puberty blockers and granted transition surgeries on pain of allegations of child abuse against those who raise objections.

And loving parents who assert their rights of counsel and guardianship risk having their children deemed ‘abandoned’ and taken into care, because the withholding of gender-affirming health care will be classed as child abuse.

It is curious indeed that just as the UK begins to push back on transgender ideology, other European countries are pushing ever further forward. Within the EU, this may well lead to transgender children in Poland, which is rather more ‘robust’ in its resistance to psycho-sociological gender engineering, seeking sanctuary and treatment in Germany.

When did “self-determination” begin to supplant legal coherence and national cohesion? And why should psychological subjectivity in bodily morphology stop at transgender, when trans-species is so much more interesting?