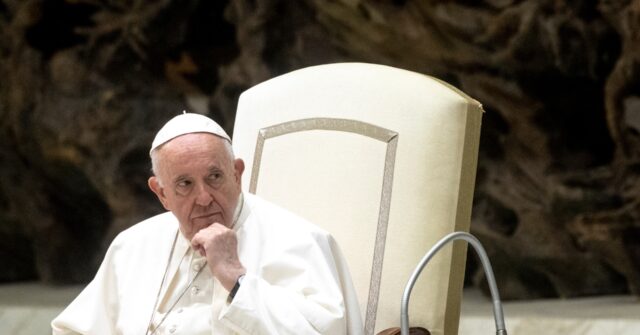 Rome, Aug 14, 2022: Pope Francis has met a group of transsexuals in the Vatican, the fourth such encounter in 2022, the Vatican newspaper L’Osservatore Romano reports.

“The Pope’s attention to people who live this fragility with great suffering is opening up unimaginable hopes,” said Sister Geneviève Jeanningros and Father Andrea Conocchia, a priest and religious sister that offer pastoral care for the group.

According to L’Osservatore Romano, the nun and the parish priest summarize the meeting, which took place after the pontiff’s weekly general audience August 10, as “revolution and hope,” words that express the meaning of the encounter for its participants.

“If this is not a revolution, what is?!” said Father Conocchia. “The Pope who grants an audience to transsexuals, addressing them with love, paternity, and simplicity is not a foregone conclusion.”

“The Gospel relaunches us, tells us to welcome everyone, especially those who are most in need and who are marginalized out of prejudice,” the Vatican newspaper added.

For her part, Sister Jeanningros declared that nobody “should suffer the injustice of being discarded, since every person has in himself the dignity of a child of God.”

Wednesday’s encounter between the pope and transsexuals followed on three other similar meetings, which took place on April 27, June 22, and August 3 of this year.

Commenting on the audience, The Advocate magazine, a pro-LGBT publication, praised Francis for “showing more support for LGBTQ+ rights than his predecessors,” while also criticizing him for his insistence on the biological distinction between men and women.

“LGBTQ+ rights advocates have welcomed Francis’s more accepting stances toward queer people than popes before him,” the magazine said. “However, he has strongly been against the view that gender can be self-determined outside of biology.”

Modern theories of gender are “often founded on nothing more than a confused concept of freedom in the realm of feelings and wants, or momentary desires provoked by emotional impulses and the will of the individual, as opposed to anything based on the truths of existence,” the magazine cites Pope Francis as saying.

In 2020, Pope Francis denounced the “evil” of gender theory, saying it seeks to erase the differences between men and women.

Gender theory is “dangerous,” the Pope said in an interview later published as a book, because it implicitly wishes “to destroy at the root that creative project that God wanted for each of us — diversity and distinction — by making everything homogeneous and neutral.”

“It is an attack on difference, on God’s creativity, on man and woman,” Francis said.

“If I say this clearly, it is not to discriminate against anyone, but simply to warn everyone of the temptation of falling into the foolish project of the inhabitants of Babel: doing away with differences to seek a single language, a single form, a single people.”