Every Tomboy Is Tagged 'Transgender' - WSJ - The Wall Street Journal 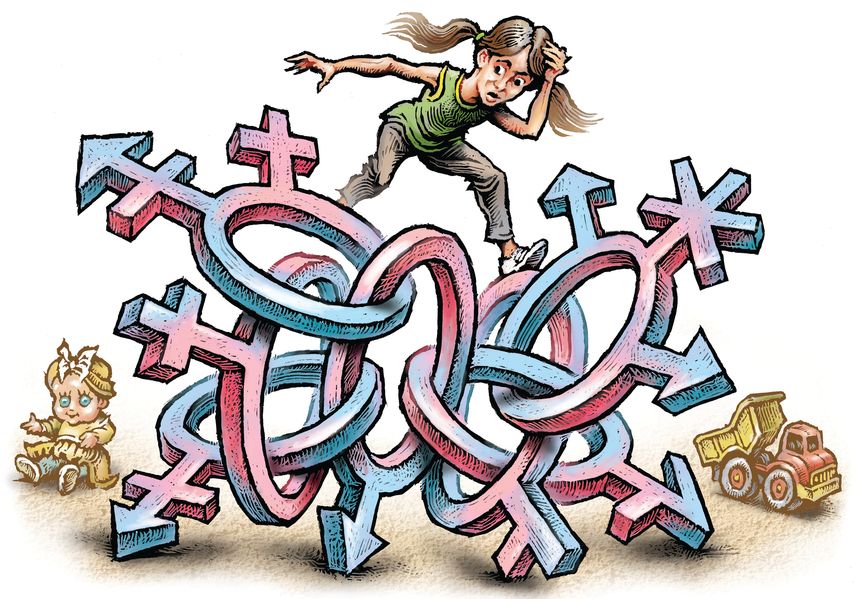 Every Tomboy Is Tagged 'Transgender' - WSJ - The Wall Street Journal

The number of young Americans who describe themselves as “transgender” has exploded over the past decade, increasing by a factor of 20 to 40, according to gender clinic referral data and a recent Williams Institute report based on surveys by the Centers for Disease Control and Prevention. Why? Jody Herman, author of the report, calls that a “bewildering question.” Clinical psychologist Erica Anderson tweeted that the surge “defies explanation. . . . Something is going on that we don’t yet understand.”

The two leading explanations are greater social acceptance and social contagion. Both are likely contributing factors, but I think the main reason is simpler. It comes down to a change in terminology.

Until recently, the term “transsexual” referred to people with a cross-sex identity, a desire to be the opposite sex or even a diagnosis of gender dysphoria. “Transgender,” the favored term now, is far broader. It encompasses mere nonconformity with rigid traditional sex roles. If you’re a tomboy or a feminine boy—if your expression or behavior is different from what is “typically associated” with your sex based on “traditional expectations”—you’re transgender. No wonder so many young people think they need medical help to “correct” their sex.

This idea is propagated by important scientific and medical organizations:

• The American Psychological Association, which establishes the norms for clinical practice in the U.S., defines “transgender” as “an umbrella term for persons whose gender identity, gender expression or behavior does not conform to that typically associated with the sex to which they were assigned at birth.” The Endocrine Society, the world’s oldest and largest organization dedicated to practice and research in hormonal medicine, uses almost identical language. So does the American Psychiatric Association, whose definition of “gender expression” is “the outward manifestation of a person’s gender, which may or may not reflect their inner gender identity based on traditional expectations.”

• The CDC, which purports to be “the nation’s leading science-based, data-driven, service organization that protects the public’s health,” defines “transgender” as “an umbrella term for persons whose gender identity or expression (masculine, feminine, other) is different from their sex (male, female) at birth.”

Hospitals don’t even hide that they are medicalizing nonconformity. The Gender Affirming Health Program at the University of California San Francisco describes the “hormonal and surgical transition” considerations for “people who do not live within the binary gender narrative,” which they say includes people who identify as “genderqueer, gender non-conforming, and gender nonbinary.” The Children’s Hospital of Chicago says its patients include “gender expansive or gender non-conforming children,” which it defines as “children and adolescents who exhibit behavior that is not typical of their assigned birth sex.”

The equating of sex nonconformity with transgenderism arose incrementally, through a complicated regulatory process involving court decisions and bureaucratic guidelines that were presided over by transgender interest groups. Borrowed from the women’s legal movement, the nonconformity framing was designed in the early 2000s and solidified during the Obama era to empower judges and bureaucrats at the federal Office for Civil Rights to bypass rulemaking procedures and force schools, on penalty of violating Title IX, to defer to their students’ gender self-identification.

We should treat children who are different with compassion and acceptance. Transgender ideology does the opposite. When children say they’re transgender, that frequently prompts a visit to a gender clinic where a “gender-affirming” therapist may prescribe puberty blockers, cross-sex hormones and even surgery to “fix” this perceived misalignment between “gender identity” (i.e., social roles and stereotypes) and the child’s biological sex.

As an ideological matter alone, this is regressive in the extreme. It repudiates decades of work by women’s-rights activists who rightfully gauged such notions as sexist and oppressive and fought to free nonconformists from social stigma. Subjecting children to body-altering surgery and drugs is a medical scandal of horrifying proportions.