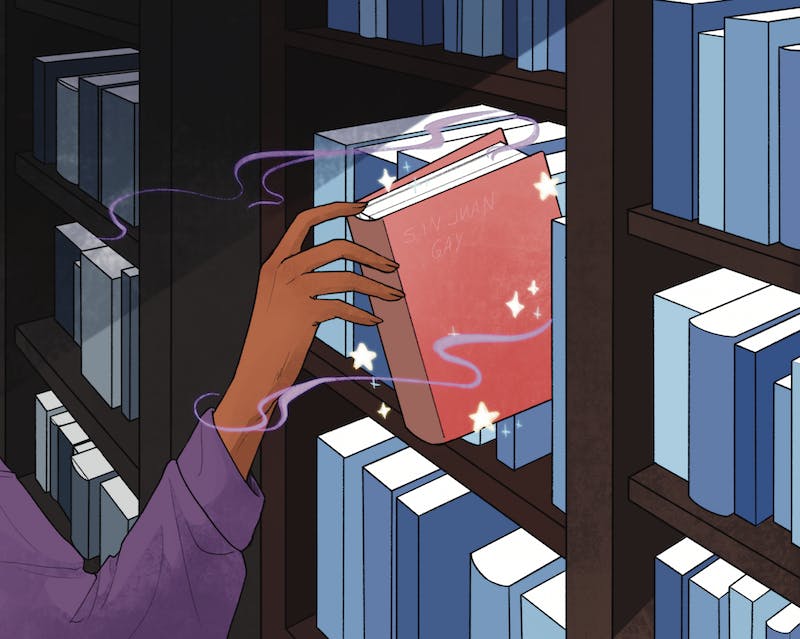 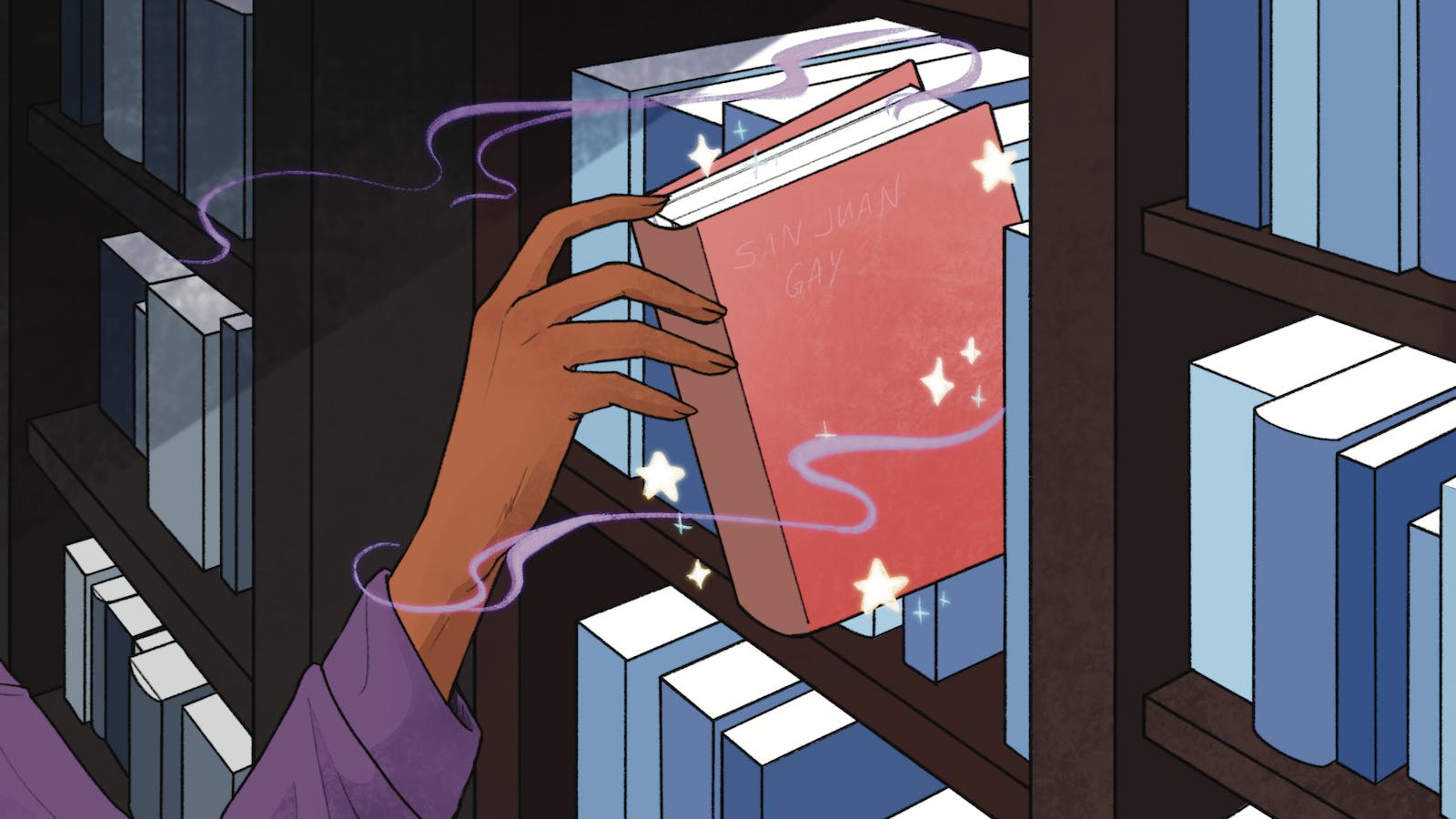 While roaming the streets of Old San Juan, I entered El Laberinto, a local bookstore. Bookshelves created floor-to-ceiling passageways. As the name illustrates, it is a labyrinth. I got lost in worlds pitched through covers and titles individually unread, yet such a crucial part of their literature. As I crossed one of the dark oak shelves, approaching the checkout line, I saw a rectangle of blue construction paper with “LGBTQ” scribbled on it. Two entire shelves, crammed into existence like they just came into being three seconds before I looked over. There, I found what I had been searching for the whole time: a map—San Juan Gay by Javier E. Laureano.

Something they don't tell you about working with (and against) the queer Archive is that, when you're searching, you need to become both the homosexual and the homophobe. You need to use words that are now considered derogatory, but were once used to address people, in order to find information about them. We’re told that the words we use are important, but in the Archive, they are all we have left. It is both my ally and my enemy, just like I am its biggest fan and number one hater. To be engaged in archival research is to be a masochist. To be a writer is the same. However, writing has allowed me to fill the “nothings”—the gaps—in the Archive by patching them with personal experience through prose and poetry. While still an act of masochism, my writing is a tool to counter the weight of the Archive. It’s my methodology to prevent the persistence of violent silences, even if the experiences are bittersweet.

The Archive is cruel. It leaves us with doors half-opened, mirrors into pasts we deemed unreachable, information and disinformation wrapped in the same red bow, and gaps that we can only yearn to fill. It’s the gaps that interest me. We, as curious humans, want what we can’t have. I have searched night and day, hoping for mere crumbs of queerness in Puerto Rican history to materialize from the dust of digital archives. I owe the acquisition of these crumbs to my homes and the filled gaps to my own experiences. I learned that, sometimes, what we want is already within us.

Around the age of nine, sometime between the transition of my Justin Bieber and One Direction phase, I first—and unknowingly—heard a homophobic slur in my school’s playground through a sing-song phrase.

A slur—a synonym for faggot. A phrase part of my classmates’ vocabulary: “Mary with her purse.” That’s the closest I can get to its translation. This phrase serves, not only as a sly way to say the slur, but also as a way to mock effeminate men. They’re addressing them with a feminine name (Mary/María) and having a purse.

I repeated the phrase. Hushes circled me.

“Yeah, there could be teachers around.”

Get The Herald delivered to your inbox daily.

But gay meant so many things, so which one of them were they referring to? What instance were they talking about, and can someone please tell me what this has to do with a woman named Mary and her purse?

In the end, I learned not to say that because it meant gay, not because it was homophobic.

“‘Marica’ [or maricón] is a diminutive of the proper name María and was born to refer to men who were outside the hegemonic canon of masculinity, either because of their homosexual affiliations or simply because they did not meet the standards of rudeness, violence or strength expected of the male, the macho.”

Providence sidewalks are terrible—raised by tree roots, dented by missing bricks. Thayer Street sidewalks are some of the best, slightly sticky beneath the shoe, but nothing too bad. That's where I was when I had to tell my friends that the loud utterance thrown from a car meant that. In Spanish. Fully resonant. It ricocheted from the overstuffed trash cans to the collage of stickers on the back of road signs. Ultimately, the word landed within my frame of hearing, unwiring my jaw and causing my eyes to gape.

Haven’t heard that one in a while.

I never expected Providence to remind me so much of home, with regaetón blasting from cars, four-wheelers rolling on their sides, and the smell of sofrito wafting over from Caliente. Sometimes I see Puerto Rican flags and take a picture—just to prove to myself that there’s more of me here than I want to believe. But despite everything, I did not anticipate hearing a homophobic slur in Spanish while going to grab coffee. Who was the man yelling that at? I don’t know. Probably a friend, because nothing says friendship like calling each other slurs. Seriously, people do this, especially in the community I grew up in. It was… a learning moment for my friends. They gave me the same look of dismay that I offered them as I explained. At that moment, we were one—united in queer confusion.

The relationship between labels within the queer community and the labeling of the queer Archive will always be at a crossroads. Terms are continuously added, modified, and subtracted to fit how we interpret contemporary sexuality and gender expression. There are slurs that have stayed slurs due to their consistent negative implication, and others that we have adopted. In this way, labeling within the queer Archive serves as a time capsule of previous conceptions of queerness. It is up to us to continue to change as the times do.

The Archive is tiring.

I don’t exist to be an antithesis to gender norms or heteronormativity, I exist in a world that uses these social classifications to give itself meaning. Since I don’t feel that those labels define everything I am, I resort to queer.

Visibility for the queer community is a double-edged sword. While we yearn for recognition, our being seen is often only prompted by a false accusation, an act of defamation, or a threat to one’s life. Being seen is what often renders us invisible, as we are pushed further into the margins. Sometimes, it feels like we are nowhere. Like the lack of our documentation in the Archive validates the popular notion that queer people do not exist. But we are everywhere and incredibly—undeniably—real.

I purchased several other books in El Laberinto that day. My parents sat at a table in La Plaza de las Palomas, a couple of minutes away, as I perused.

The Plaza is gorgeous and, as the name declares, full of pigeons. I walked towards them, my brown paper bag swinging.

I shuffle into the wooden stool.

My mother set down her phone and enthusiastically asked, “What did you buy?”

I pulled them out: