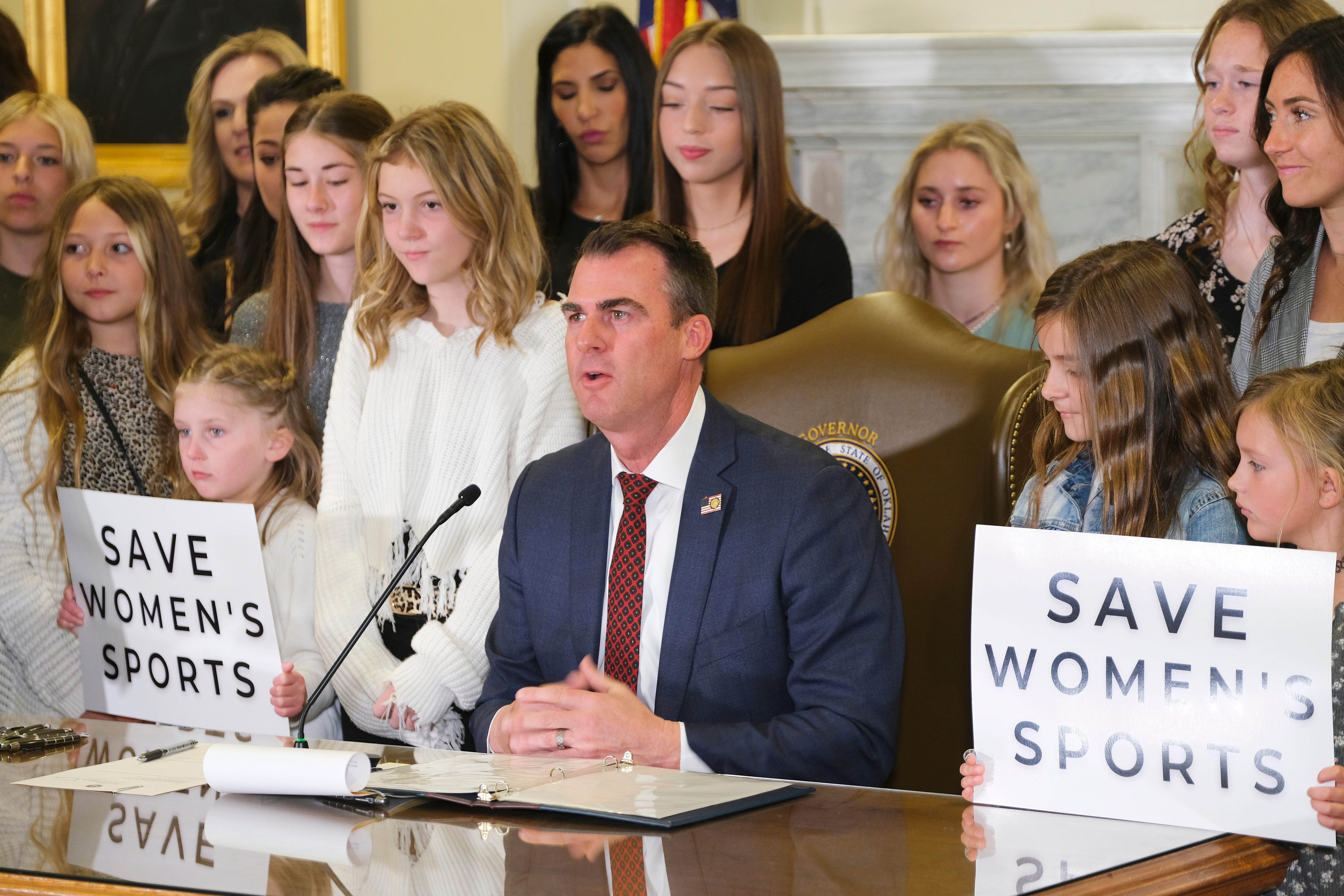 Using the bathroom at school wasn't complicated for Andrew Bridge. That is, until May 25.

On that date, Gov. Kevin Stitt signed Senate Bill 615 into law, immediately requiring Oklahomans to use the school restroom that matches the sex on their birth certificate.

Andrew, 16, is transgender. The sex on his birth certificate is female.

Before the law took effect, Andrew said he used the boys bathroom at Noble High School without issue. The school never stopped him, his friends were supportive and "I don’t think students really noticed," said Andrew, a senior.

The new law requires him to use either girls facilities or a single-occupancy restroom.

In hopes of overturning the law, Andrew decided to challenge its constitutionality. He and two other transgender students filed a lawsuit against the state earlier this month with the ACLU, Lambda Legal and Covington & Burling LLP.

“Trans students are just students trying to go to school,” Andrew said. “We’re not trying to hurt anybody. The state has decided to go after not just trans people but trans kids. That’s just messed up.”

SB 615 was the latest of multiple bills to become law this year affecting transgender and nonbinary Oklahomans, who found themselves a focus of Republican-backed legislation.

A month later, he approved a ban on gender-neutral birth certificates. Lawmakers drafted the legislation after the Oklahoma State Department of Health issued the state’s first and only birth certificate with an X marker in place of a male or female designation.

"I believe that people are created by God to be male or female. Period," Stitt said in a statement at the time. "There is no such thing as non-binary sex."

Herrod said they would have pursued a gender-neutral birth certificate if it weren’t illegal in Oklahoma.

Laws like this make it uncomfortable to live in the state, Herrod said, but they intend to stay. They have goals to become a nurse and to run someday for the state House of Representatives.

“As a nonbinary person, I’m not a girl. I’m not a guy. I’m nothing. I’m trying to live my life, be who I am, and this legislation is making it a lot harder,” Herrod said.

The bathroom bill is the most “singularly harmful” legislation for transgender Oklahomans this year, said Nicole McAfee, executive director of Freedom Oklahoma, a nonprofit advocating for LGBTQ+ rights.

Similar bathroom regulations were struck down in federal courts elsewhere in the U.S., but the Oklahoma Legislature passed SB 615 anyway. McAfee, who is nonbinary, said this leaves some students and families worried about what restrictions might come next.

"There’s a lot of anxiety and just a lot of fear for the students and also for their parents and for educators," McAfee said. "I think that there's so much unknown at each school district about how these things are going to be enforced and policed."

SB 615 requires schools to designate all bathrooms, locker rooms and changing rooms for the exclusive use of the male or female sex. School districts found in violation of the law could lose 5% of their state funding, a penalty that could cost thousands or even millions of dollars. Complaints of potential violations must be filed with the Oklahoma State Board of Education.

The Fourth Circuit Court of Appeals twice found it unconstitutional and a violation of Title IX to prevent students from using the bathroom that aligns with their gender identity. Both rulings, which the U.S. Supreme Court let stand in 2021, were in favor of Gavin Grimm, a transgender boy from Virginia who was required to use unisex restrooms at school.

Last year, the U.S. Department of Education classified discrimination on the basis of gender identity as a Title IX violation.

Biden administration guidance and Fourth Circuit rulings do not force schools in Oklahoma, a state in the 10th Circuit, to open bathrooms to students born of the opposite sex, Attorney General John O’Connor wrote earlier this year.

O’Connor urged lawmakers to pursue legislation that would “remove any doubt or ambiguity” on school bathroom access.

Much of the firestorm over school bathrooms centered on Stillwater Public Schools, which had a practice of allowing students to use the restroom matching their gender identity. The school district reported zero incidents of misbehavior from the practice in the six years it was in effect.

With a green light from the attorney general, SB 615 rapidly advanced through the Legislature, as Republican leaders claimed girls restrooms were at risk of boys entering inappropriately.

"It's about safety, it's about protection and it's about common sense," said Rep. Danny Williams, R-Seminole, the House author. "We've got things turned upside down and backwards."

Powell said the students know their identities mean they aren’t universally liked, but that hasn’t stopped their “I’m still going to do my thing” mentality.

“They’ve already been queer in school their whole life,” Powell said. “They know what to expect. In Oklahoma before these laws went into effect, they were still persecuted. Now, it’s just legal for them to be persecuted.”

The Trevor Project, a nonprofit for LGBTQ+ youth suicide prevention, found 59% of transgender boys considered suicide and 22% attempted it this year, more than any other gender identity. The survey showed 48% of transgender girls and 53% of nonbinary youths contemplated suicide while 12% and 19% attempted, respectively.

A January poll from the nonprofit reported 85% of transgender youths say the introduction of anti-transgender bills has a negative impact on their mental health.

Andrew, who’s suing to overturn SB 615, said he has no intention to stay in Oklahoma. He’s applying for colleges exclusively on the West Coast and doesn’t plan to ever move back.

“I think as a trans person there’s a lot of feeling like an other, and you constantly have to prove to other people you are the gender you say you are no matter how sure you are,” he said. “Other people are always going to be questioning it. Part of just feeling like a normal person is being able to use the normal restroom.”

Reporter Nuria Martinez-Keel covers K-12 and higher education throughout the state of Oklahoma. Have a story idea for Nuria? She can be reached at [email protected] or on Twitter at @NuriaMKeel. Support Nuria’s work and that of other Oklahoman journalists by purchasing a digital subscription today at subscribe.oklahoman.com.